Guide to the City That Has it All: Las Vegas 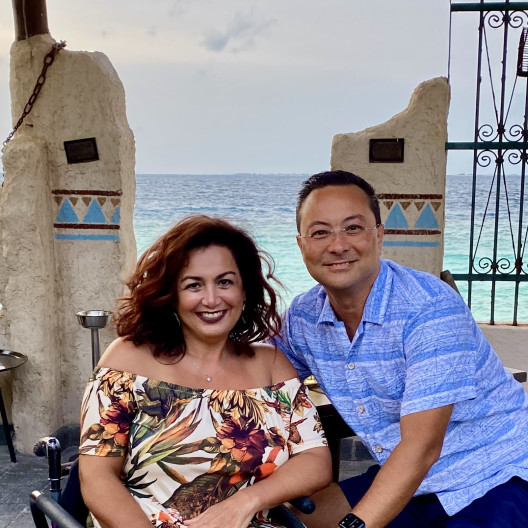 Las Vegas is central to everything you might want to do. Within a 4-hour drive radius, you have beaches, skiing, mountains, deserts and the Grand Canyon. And in the middle of all that scenic nature is Las Vegas itself - world-class dining, shopping, spas and entertainment, along with over 150,000 hotel rooms to accommodate every taste. Las Vegas is an amazing home base for your adventures!

Book with Judy & Glenn to access exclusive perks and experiences on your trip.

Where to stay in Las Vegas, Nevada

A top choice for family visits, the Four Seasons is the only non-gaming and non-smoking hotel on the Vegas strip.

An elegant antidote to the high-octane Vegas experience, stay here for the colorful style, personalized service and A+ shopping.

The Cosmopolitan of Las Vegas

The hip pick on the strip, with an artsy vibe in the refurbished rooms, and a must-visit beach pool.

Located in the heart of the strip, the Waldorf Astoria is Vegas' chicest and most tasteful accommodation with sprawling views of the city.

Adults-only luxury resort with a two-story casino, steps from all of the action in Las Vegas.

Unlock perks by contacting Judy & Glenn to book your trip.

Things to do in Las Vegas, Nevada

Gambling (casinos everywhere) - Called "gaming" in Las Vegas, this is what put Las Vegas on the map. Trying your hand at table games like Blackjack and Roulette to slot machines and sports betting, gaming can be a thrill. You can have just as much fun in the middle of the excitement watching the action.

O (Bellagio) - Cirque du Soleil's most popular show, this show is a breathtaking and electrifying show that features acrobats, gymnasts and other types of acts - all centered around water. The stage itself is part of the act, appearing and disappearing throughout the show to incorporate diving and swimming.

Absinthe (Caesars Palace) - An ever-changing show that is basically a circus on steroids, this rousing show never ceases to awe.

Resident Performers - Where else in the world can you find multiple top performers like Adele, Katy Perry, Luke Bryan, Usher and John Legend performing in residencies?

Nightclubs - Famous for the nightlife, Las Vegas has many well-regarded nightclubs to pick from like XS at the Wynn and Omnia at Caesars Palace. There are also lounges and bars of every type to accommodate any tastes.

Spas - There may not be a denser accumulation of first-class spas anywhere on the planet. Multiple great options are Canyon Ranch Spa at the Venetian, the Waldorf Astoria Spa (formerly the Mandarin Oriental), Sahra Spa at the Cosmopolitan and The Spa at Aria. With spas up to 80,000 square feet, you can experience hammams, Finnish spas, hydrotherapy and anything else you may have ever heard of related to relaxation.

Pools - Similar to spas, there is almost every type of pool to lounge around and because it is warm (and hot) seven months of the year, there is plenty of time to explore the pool scene. Many people choose the hotel they will stay at based on the pool scene they like, from formal pool areas like Bellagio all the way to water park-like at Mandalay Bay. There are even "day-club" pools if the nightclub action is not enough.

Red Rock Canyon - If you love to hike and get away from it all, then the famous Red Rock Canyon could be perfect for you. There are multiple options, from easy to difficult, hiking trails through the beautiful and vivid red and orange rock formations that make for a peaceful retreat into nature.

Other Outdoor Options - Water sports at Lake Mead, camping at Mount Charleston, touring renowned Hoover Dam or skiing at Lee Canyon, Las Vegas has a multitude of outdoor activities that are not as well known as the bright lights of the Strip.

Grand Canyon - One of the top wonders of the world, the Grand Canyon is a must-see for everyone. Only about a 4-hour drive outside of Las Vegas, this magnificent natural wonder is considered one of the top attractions for international visitors. Even better, many helicopter tours depart from Las Vegas, giving people a birds-eye view of this marvel.

Park City - Home of the 2002 Winter Olympics, this town is about a 6-hour drive from Las Vegas and perfect for people who love to ski and do other winter activities. In the summer, the hiking and biking trails are very popular as well.

SW Steakhouse - The best steakhouse in Las Vegas and that's saying something. There are many steakhouse options but this restaurant at the Wynn is marvelous. The food is unbelievable, the service will impress and the ambiance is unique.

Bardot Brasserie - Famous chef Michael Mina has created a portal to Paris, the food and decor will transport you. Dinner is wonderful but we highly recommend eating here for their brunch.

Delilah - A modern take on classic Las Vegas, this restaurant brings the glamour to a new take on the supper club. This is not just a meal but an experience.

Lotus of Siam - The best Thai cuisine not in Thailand, this restaurant is well-known for its extensive and delicious Thai menu. One of the most difficult reservations to get in Las Vegas, with customers coming from Sothern California just to eat here.

Picasso - This two-Michelin-star restaurant features Mediterranean cuisine surrounded by actual Picasso works of art throughout the restaurant. This was one of the restaurants that originally kicked off the renaissance of fine dining in Las Vegas over 25 years ago and is still at the top of its game.

Bacchanal Buffet at Caesars Palace - The fine dining version of a buffet (if that's such as thing), if you only want to visit one buffet, this is it. Buffet's are known for their quantity and the Bacchanal has that but where they excel is in the quality. They have nine live-action kitchens where they make the food fresh, ranging from high-end seafood to pastas and meats. Cuisines included are Japanese, italian, Chinese, Mexican and more.

Harlo Steakhouse - Relatively new to Las Vegas, this restaurant is already one of the local's favorites. An enticing setting with polished service, this off-Strip place has the same quality of food as some of the bug Strip restaurants at a more affordable price. Not to mention that it also has a terrific drinks menu.

Javier's - A modern take on Mexican cuisine, this restaurant is new to Las Vegas, with the first two in Los Cabos and Los Angeles. With a sweeping menu of meats and seafood, this eclectic spot is also a visual treat as well.

In N Out - If you are from one of the 43 states that do not have In N Out (or from outside the US), then you need to give the West Coast's most prominent burger chain a try. All they have are burgers, fries and shakes (I guess other beverages as well). There will almost always be long lines and where else can you get a good-tasting burger, fries and drink for under $6?