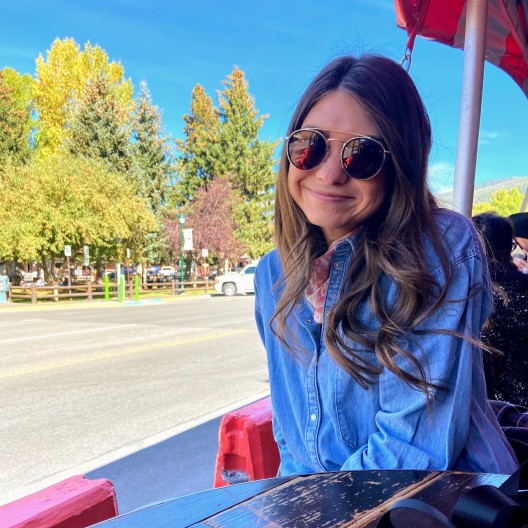 If you've never been to Charleston, South Carolina, you need to pause, open a new tab, book your flight and come back here to finalize your plans. Charleston is one of those unique, to-good-to-be-true cities that never fails to leave you awestruck. Pat Conroy said it best when he described it as, "a town so pretty it makes your eyes ache with pleasure just to walk down its spellbinding, narrow streets." It's home to live oaks that are older than this country itself, food that is absolutely out of this world and an aesthetic that exudes brilliance. Now, picture all of this covered in Christmas lights — it's extraordinary.

Book with Caroline to access exclusive perks and experiences on your trip.

Where to stay in Charleston, South Carolina

Sophisticated chic Charleston home with an air of Southern charm perfect for laying back on the balcony or enjoying a bike ride around town.

Iconic Charleston landmark with lavish accommodations, legendary service and experiences to elevate your experience in the Southern city.

Set in a 19th-century mansion, this grand Charleston hotel boasts elegant rooms and a host of luxury amenities.

Unlock perks by contacting Caroline to book your trip.

Things to do in Charleston, South Carolina

1. Charleston Strolls Holiday Walking Tour - South of Broad, in the historic district, you'll feel as if you're walking through a Southern Christmas Wonderland. Experience the holiday spirit on a tour with Charleston Strolls as you get a glimpse of 19th century Charleston dressed to the nines in its finest holiday decor.

2. Holiday Performances - "A Christmas Carol" and "The Best Christmas Pageant Ever" of Charleston Stage at the historic Dock Street Theatre, “The Holiday Edition” of The Sound of Charleston, "NUTCRACKER! Magical Christmas Ballet" and Dance Conservatory of Charleston's performance of "The Nutcracker" are just a few local holiday performances to choose from!

3. The Festival of Lights - The wondrous light display, Santa's Village and Winter Wonderland are why the Festival of Lights is a Lowcountry favorite holiday tradition. Hot chocolate and warm treats make the night even sweeter! November 11 - December 31, 2022, 5:30-10:00 p.m.

4. Christmas on the Battery - Take a self-guided step back in time through the festively decorated Edmondston-Alston House. Tour this over 200 year old historic home by candlelight while listening to the sounds of the Charleston Caroling Company. Finish up in the courtyard with a glass of wine or hot chocolate where local storyteller, Fouché Sheppard, will read Gullah Christmas stories. Dec. 1-2.

5. Holiday Strolls Cocktail Tour - This is a festive 2.5 walking tour of Christmas in historic Charleston which also includes 3 different stop in local lounges. Here, you'll enjoy holiday cocktails that were expertly-crafted for this specific tour in mind.

7. Charleston Holiday Market - During Christmastime, the Charleston Farmers' Market extends its hours on select Saturdays and Sundays for the Holiday Market. It includes all of the local vendors of the Farmers' market plus holiday vendors, live music and activities for kids! Saturdays & Sundays, 9:00 AM – 3:00 PM on December 3, 4, 10, 11 & 17, 2022.

8. Holiday Wining and Dining - Be sure to check out the local flavors of Charleston during your seasonal trip. The restaurants and bars are decorated with the festive trimmings of Christmas making for an extra cozy experience. See some suggestions below!

2. Poogan's Porch - A Charleston classic since 1976 that same say is still being haunted by the pooch this restaurant is named after. Get the homemade buttermilk biscuit and sausage gravy—you won't regret it.

3. Edmund's Oast - Classic Charleston brewing company that's home to "a trifecta of gustatory delights based in Charleston, SC" including a restaurant, taproom and retail store.

5. Home Team BBQ - Arguably, the best bbq in the area with a fun and family friendly atmosphere.

6. The Rooftop Bar at Vendue - Sip on lively drinks with delectable snacks while taking in the stunning sights of Charleston at the rooftop bar located at the Vendue Hotel.

7. Citrus Club - This bar at the Dewberry is another hotel rooftop that sits a bit higher than the rest. It's upscale, yet inviting. It has just the right away of exclusivity to make you feel as if you are in on Charleston's best kept secret.

8. Bar at Husk - The more casual side of Husk, with an indoor cocktail lounge - and a picturesque outdoor courtyard - is serving up a laid-back dining menu and/or delicious cocktails while you wait for your table next door.

9. The Obstinate Daughter - "Southern restaurant that is influenced by French, Italian and Spanish cuisine" meaning there's something for everyone! Be sure to try The Old Danger pizza that's baked fresh in their wood fired oven.

10. Halls Chophouse - Take a seat at the original Hall's Chophouse with the finest cuts of meat that money can buy. An added bonus is their extensive wine list along with their delicious family-style side dishes.